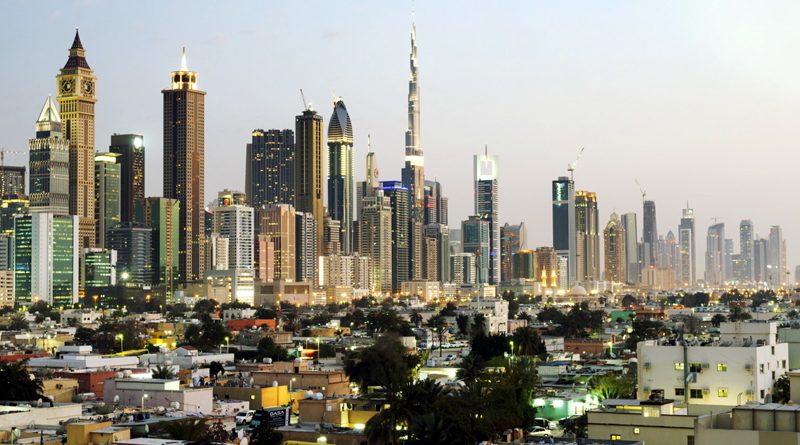 27th November 2013 was the date when Dubai won the bid to host Expo 2020. The excitement can be seen from Dubai official by the celebrations held afterwards. Even Dubai government announced public holiday next day on 28th November 2013. Since then Dubai is working hard to make Expo 2020 the success for the country. Various Dubai projects has been announced and officials are making sure that all will be completed before the date.

Dubai Projects to be Completed Before Expo 2020

Here we are going to mention top 10 major Dubai projects to be completed before Expo 2020. 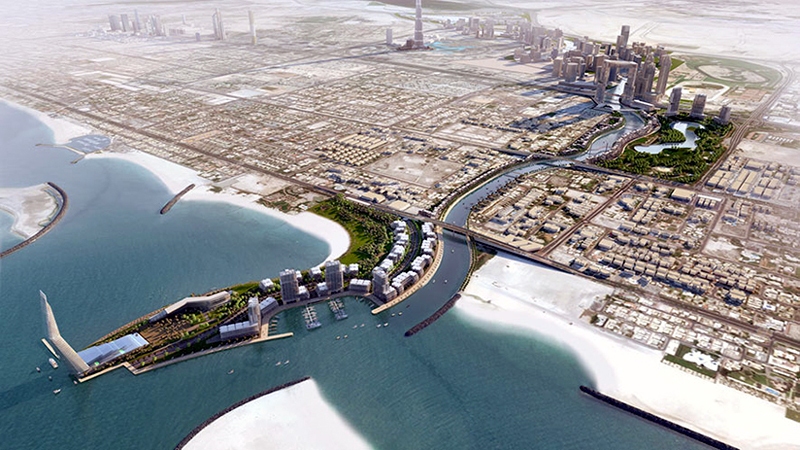 Recently Dubai Water Canal project got extension and many feels that it is not possible that the project will be completed on expected dates. The $545 million Dubai Water Canal Project will transform Business Bay and connect the area with the Arabian Gulf over three phases that are set to complete October 2016. The canal itself will measure six meters deep, while bridges will be built eight meters high to allow the passing of yachts and marine craft.

Museum of The Future 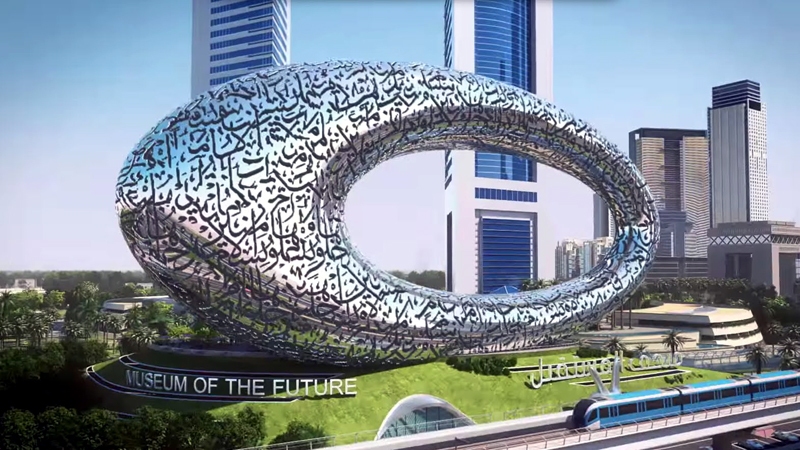 The Museum of the Future that is being funded by the HH Sheikh Mohammad Bin Rashid Al Maktoum. The Museum will be one of the most exquisite museums of the world on completion. This US $200 million amazing Dubai projects is being considered to be completed by the year 2017. Because of its idea people are anxiously waiting to visit the museum. The circular-shaped building will be located next to the Jumeirah Emirates Towers near Dubai International Financial Center (DIFC). In addition to becoming a major tourist destination, the Museum will offer advanced courses and specialized workshops, as well as public talks and events. 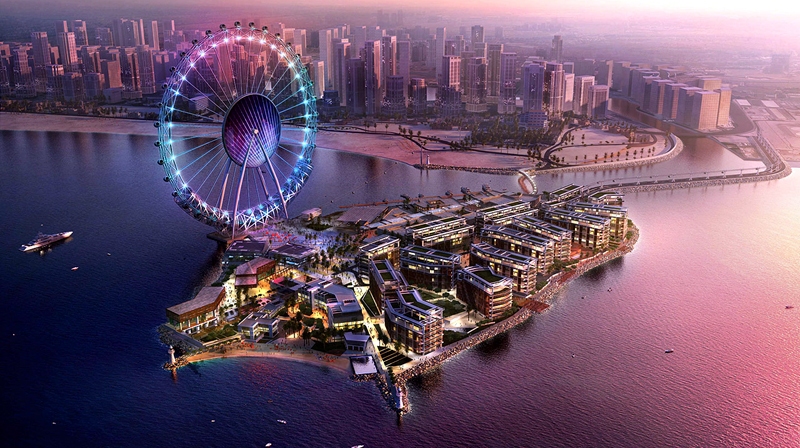 Having the cost of $1.6 billion, this amazing Dubai projects is said to be spread over a distance of 500-meter. That will make it one of the largest tourist hotspot in the World. Bluewaters Island construction started in April 2013 and is expected to be completed in first quarter of 2018. The Major attraction of Bluewaters Island is “Dubai Eye”, A 210 meter (689 ft) tall giant Ferris Wheel. On completion it will be the world’s tallest Ferris Wheel. The project will also comprise retail, residential, hospitality and entertainment zones. Project will also have two 1400 meters each bridges. 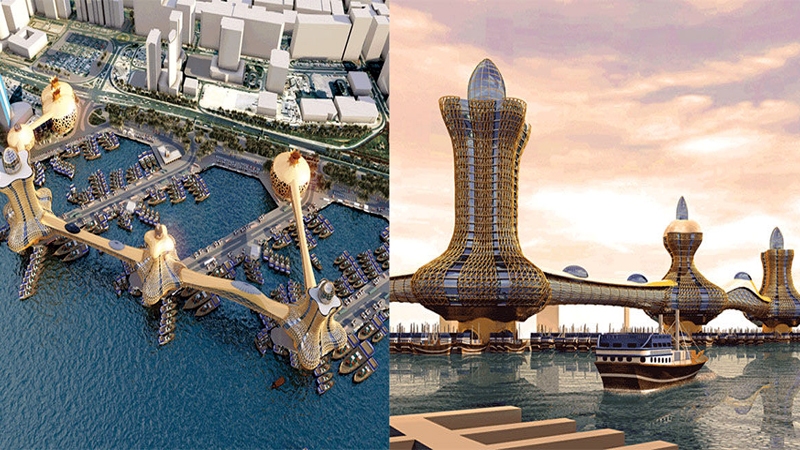 This beautiful Dubai Projects is inspired by the well-known tales of Aladdin and Sinbad. Aladdin City project will be having three towers which will be connected with air conditioned bridges with moving floor. The shape of the bridges represents the form of exotic marine life such as dragon and snakes. Three towers will have a built up area of 110,000 square meters with the highest tower of 34 floors. The other two towers will have 26 and 25 floors respectively. There will be a total parking space for 900 cars. The cost and completion date of the project has yet to be revealed. 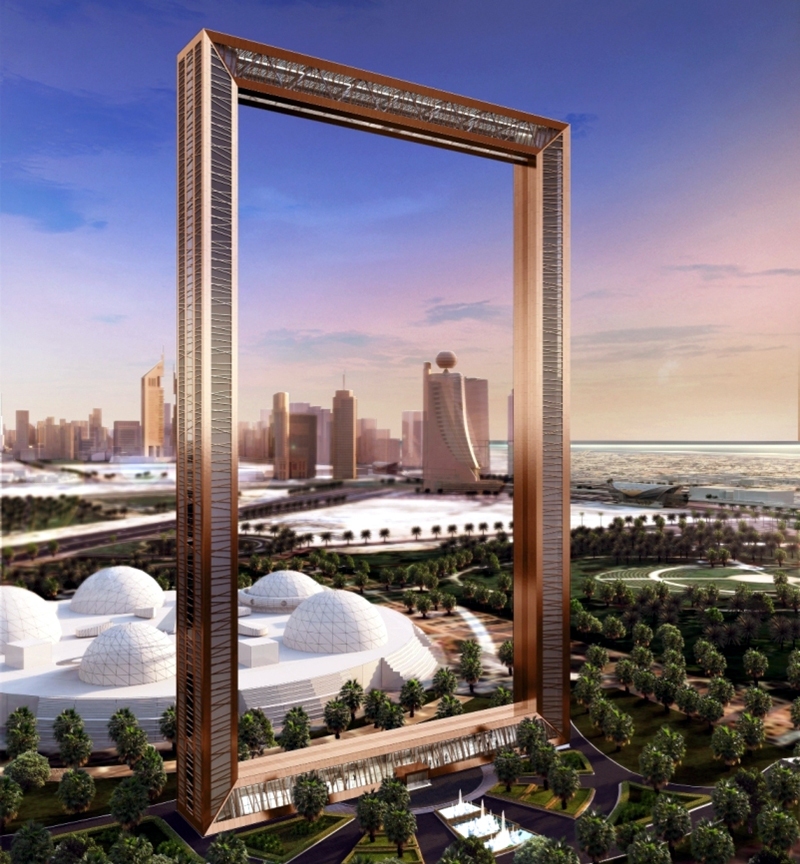 Dubai Frame is being constructed in the heart of Dubai to enhance the attraction of the city even more. It is located near the Star Gate games and rides area of Zabeel Park, the frame will boast panoramic views of Old Dubai from one side and the skyline of New Dubai from the other side. Once complete the pillars will be an iconic Dubai projects shaped like a giant window frame. The over-sized rectangle will serve as a giant 150 metre by 93 metre viewfinder. There will also be a viewing gallery on the top side of the frame called the “sky bridge” offering panoramic views. The US$43.5 million project is being considered to get completed in December 2015.

Jewel of the Creek 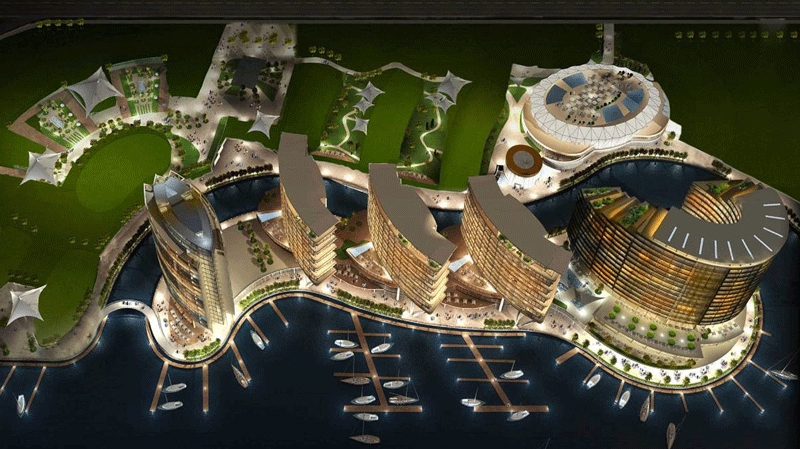 The US$816 million Dubai projects will consist of a massive waterfront complex, featuring 19-floor apartment buildings, three office towers, two luxury hotels, a recreation center and a convention center with a ballroom, as well as a marina and a slew of retail spaces for shops and restaurants. Jewel of the Creek will be located between Al Maktoum Bridge on Baniyas Road and the Floating Bridge. The gigantic project will cover 123,955 square meters of land and is expected to be completed in the first quarter of 2017. 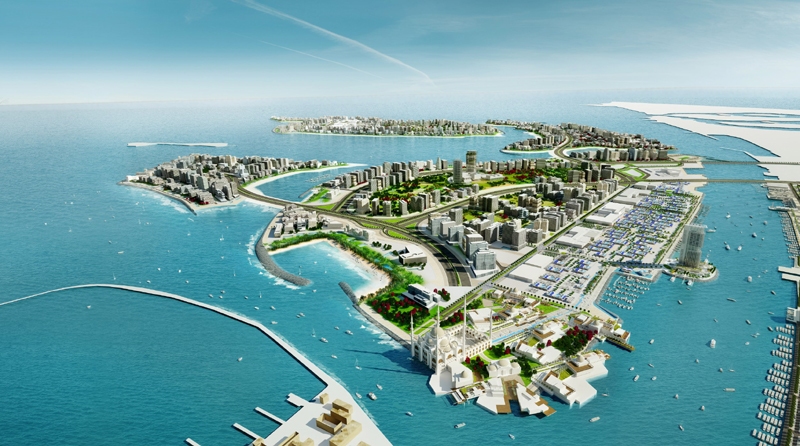 A 15.3 square kilometer waterfront city featuring four islands will have hundreds of hotels including a large shopping mall, 1,400 retail units, serviced apartments, mixed use buildings, an Arabic souk-style night market, an amphitheater for 30,000 people and marinas that can accommodate large yachts. Deira Islands project was initially planned to be part of the Palm Islands and was called ‘Palm Deira‘. The project is scheduled to be completed by Q3 2018 at a cost of $150 million. 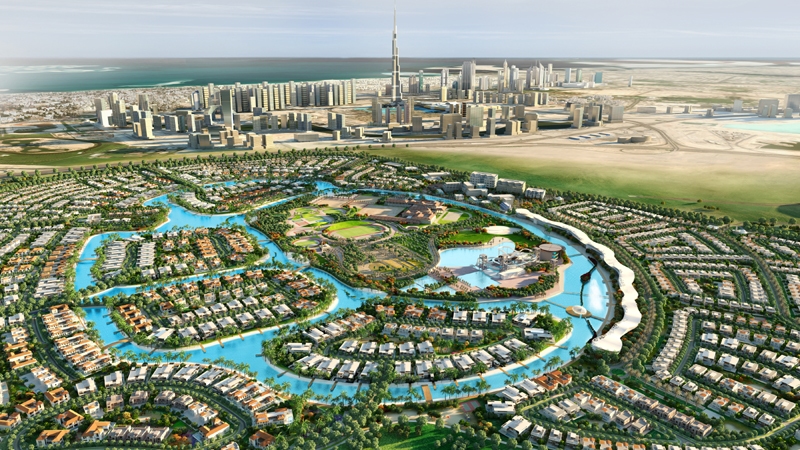 The $10 billion Mohammed Bin Rashid Al Maktoum (MBR) City – District One, will handover the first and second phase of villas in mid-2016 and mid-2017. MBR City is located within minutes of the Burj Khalifa and Dubai Mall, the ‘super luxury’ District One project as it is being called is spread over 440 hectares with more than 60% of the total area being allocated to green and open spaces. Almost 1,110 acre Dubai projects includes 7 kilometer stretch of Crystal Lagoons for swimming, kayaking and other activities. The project will also features The world’s largest artificial beach, 14 kilometer boardwalk and 8.8 kilometer cycling and jogging track. The project will also feature entertainment, retail and hospitality offerings. 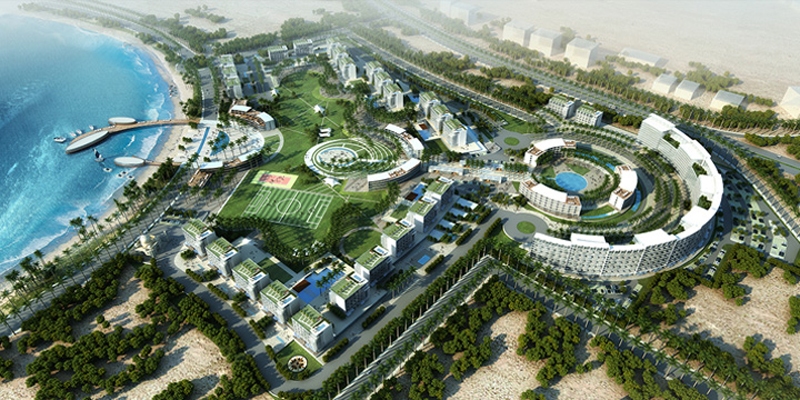 Emaar Properties and Dubai Municipality’s mixed-use beachfront development in Dubai’s Al Mamzar district is expected to be completed by fourth quarter of 2018. Dubai projects, which stretches over 9,000,000 square feet, will have 4,000 residential units, 300 hotel rooms, 250,000 square meters of retail amenities and 3.5 kilometer of walking tracks covered with plantations. Planned around the 53 hectare Al Mamzar Lake, the beachfront project is expected to have a preliminary cost of $2.72 billion. 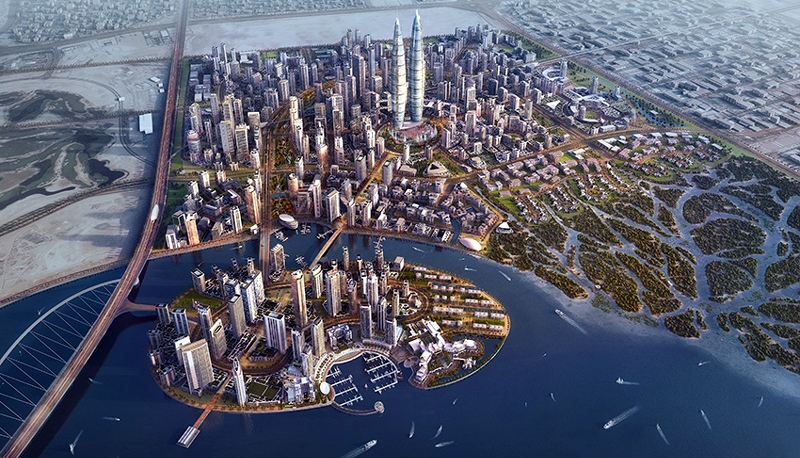 Dubai Creek Harbour is the joint venture of Emaar Properties and Dubai Holding. Dubai projects will consist of six towers including World’s tallest Twin Towers. This amazing Dubai Projects is three times the size of Downtown Dubai located alongside Dubai Creek adjacent to Ras Al Khor. Dubai Creek Harbour project will comprise 3,664 office units, 8,000,000 square feet of retail space, 39,000 residential units and 22 hotels with 4,400 rooms. Dubai Creek Harbour is designed with future generations in mind offering the best infrastructure. It is a place where people will live, work and play and can build a community where families can reach their aspirations for generations to come. 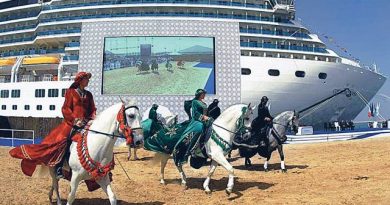 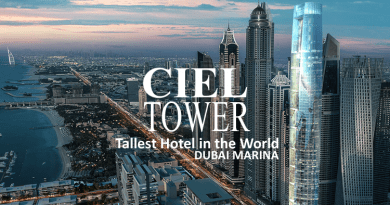 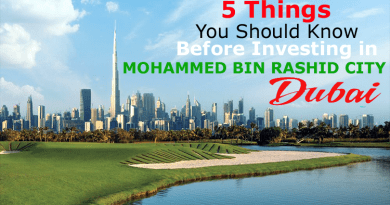