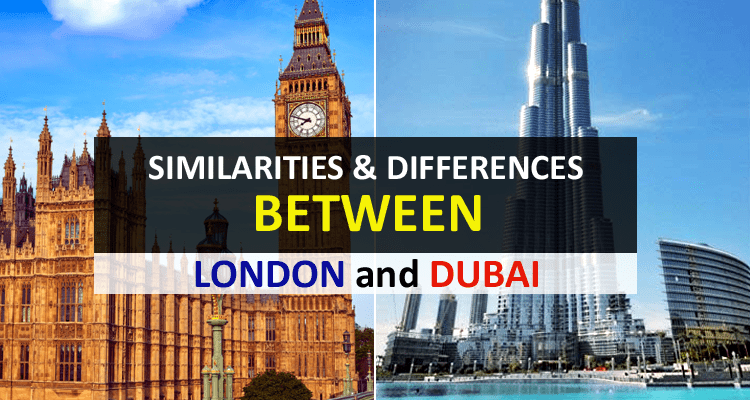 When you make a comparison between these two cities Dubai and London, The first thing that came into mind is that these two cities have nothing in common. There are not the differences but the similarities between both cities that will surprise you.

Here we are with the list of eleven similarities and differences between these two beautiful cities in the world.

Similarities Between Dubai and London

1. Multi-Cultural Society
A Large number of immigrants from all over the world are living in these both cities. The beauty of Multi-cultural society make these cities more vibrant, diverse and the best places to move to. Multi-Cultural society let people understand others culture, religion, lifestyle and most importantly it brings them closer to each other.

2. Brands, Restaurants are the same
It is estimated that more than 200,000 British expatriates are living in UAE, mostly are living in Dubai. They are working with high salaried jobs and mostly living in posh areas of Dubai like Dubai Marina. Due to this, you may find almost every other British brand and restaurants in Dubai. For the British, sometimes it feels like they are living in a city in England.

3. Skyscrapers and Unique Architecture is Everywhere
Dubai is very well-known for its unique and high skyscrapers. Because of these unique architectures, Dubai is attracting thousands of tourists every year. Same is true with London, though there maybe be not many tall skyscrapers in London still a jungle of tall buildings with modern-looking architecture attracts a lot of tourists.

4. Quirky Arts is Common in Both Cities
This may really surprise you but the quirky art is almost as common as in the city of London. You can see shopping malls lobbies covered with umbrellas, graffiti of cartoons character to Royal families painted on the walls. Also, the sculptures are everywhere.

5. Bars and nightclubs where Celebrities visits regularly
Like London, Dubai is a city where nightlife is very vibrant. There are many nightclubs in Dubai which easily match the craziness of any nightclub in Europe. And most importantly, both cities are full of celebrities and you can find many partying and having fun in there.

7. Rich people showing off in both cities
London and Dubai both are full of rich people who do not miss a chance to show off. Rich people would not hesitate to spend thousands to small things to show their wealth and both Dubai and London provide a lot of opportunities for that.

8. Cities of Expensive Shopping Malls
Both cities are known for expensive and luxurious shopping. Shopping malls like Harrods in London and Dubai Mall in Dubai make it very easy for both the tourists and the locals to spend more and more money. Even if you don’t have enough money you still can a lot of fun in these malls by wandering around.

11. English is the Common Language
Arabic is the national language of the UAE. But not many people know that English is the most common language. Due to almost 90%, Dubai’s population is consist of ex-pats from all over the world, they communicate in English with each other. Sometimes you don’t have to say or hear a single word of Arabic for many days during your stay in Dubai. There is a high possibility that you meet someone who is living in Dubai for many years but still don’t know the basics of Arabic.

Differences Between Dubai and London

1. More variety of street food
London is very vibrant in street food. You can find a different kind of street food in every corner of city centres. Dubai is also very rich in types of food but most of them are available only in malls or in the shape of shops due to hard weather conditions.

2. Ice Skating outside
Dubai is located near the equator and has a very low rain percentage around the year. In Summer, the temperature raises up to 50-degree Celcius on a regular basis. So there is no way that you can ice skate outside in Dubai. But to overcome this Dubai has an indoor ski resort called “Ski Dubai” at Mall of the Emirates where you can enjoy ice skiing.

3. Markets vs Souks
Like any other large city, London has many famous markets and they are full of fascinating things to shop and wander around. Dubai is famous for its large shopping malls but their traditional markets called “Souks” sells almost everything you imagine. They are cheaper in price and are based on traditional Arabs style old markets.

4. Historical Buildings vs Modern Architecture
Though Dubai also has some historical buildings like Al Bastakiya and the Al Fahdi Fort which are built-in like the 1700s. But 90% of Dubai is newly built and known for its modern architecture. On the other hand, London is a very historical city and is full of many historical buildings which gives you the feel of the Victorian age.

7. Freedom of Using Social Media, Websites and Even Monarchy
Dubai is one of the topmost visited tourist destinations in the world. But still, there are many things which are restricted in Dubai like You can not talk against the royal family of UAE, You can not use Skype and WhatsApp Calling feature in Dubai, there are many websites which are restricted in UAE and there is many filters exist while using social media. And London is like open heaven in that way. Even you can talk openly against the Royal Family.

9. Kissing in Public is not Allowed in Dubai
Public Display of Affection (PDA) can take you into a lot of trouble in Dubai. You can not kiss or make out in any public place or even at the back seat of a taxi in Dubai. That is why you need to be very careful while showing these kinds of gestures in public. On the other hand, London is totally opposite to Dubai where society is very broad-minded in these matters.

10. London Weather is more Vibrant Compare to Dubai
Dubai is known for the hot weather in summer when the temperature can rise up to 50-degree Celcius on a regular basis. In this weather outdoor activities in Dubai even at night time are very restricted. So it is highly recommended that if you are planning to visit Dubai then you should plan it in winter when the weather is very pleasant. If you can bear the heat of Dubai than touring in the off-peak season can save you a lot of money.

11. Strikes and Protests are Common in London
In Dubai, labour rights are not the same as in London where you hear of strikes and protests in every other day. Also, because of strict rules, you can not protest against the govt or any other policies in Dubai. 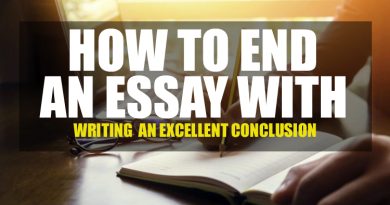 7 Ways to End an Essay with Writing an Excellent Conclusion

April 28, 2022 Dubai Explorer Comments Off on 7 Ways to End an Essay with Writing an Excellent Conclusion 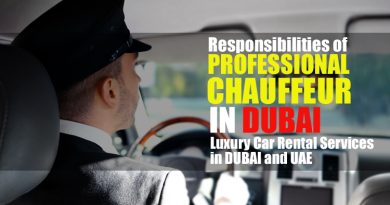 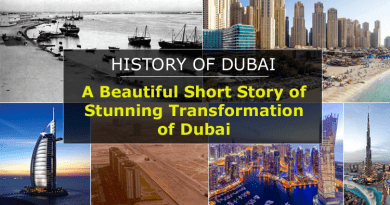 A Short Story of the Stunning Transformation of Dubai

August 22, 2019 Dubai Explorer Comments Off on A Short Story of the Stunning Transformation of Dubai