The most beautiful garden opened on Valentine’s Day this year. Most of visitors named it as a “little piece of Eden” on earth. It is located in Dubailand near Arabian Ranches.

Flowers are decorated in shapes of Heart, Stars, Different styles of Circles, Flower Pyramids, Igloos, Flower-decked vintage Cars, Different style Layers, Water Bodies, arc-shaped walkways, Colorful Umbrellas Covered Pathways. All of them are patterned beautifully that every inch of garden has its own uniqueness.

Kate Holbrooke from canadian who visited Park said that she never seen such a beautiful sight in her life and can never imagined a “piece of edn” could be possible in the desert. She said: “I’ve been to so many cities but have never seen anything like this.”

The Garden features type of flowers which have never been planted in Gulf region before like Calendula, Marigold, Petunia etc.

The Garden is developed by Akar Landscaping and Agriculture Co. This is the same company that developed Al Ain Paradise near the Oman border. Al Ain paradise consists of 10million flowers and the size of garden is equal-ant to four football fields.

Abdel Naser Y. Rahhal, Akar spokesperson, told reporters that there are at least 45 colored flowers found in the garden and no two season will be the same as it will follow different themes each season. He said: “We are currently concentrating on annual, seasonal flowers. We are also planting trees on the perimeter as windbreakers.”

Abdel Naser continues: “We have put this together with tourists in mind. We also want to demonstrate that it’s possible to green the desert through judicious re-use of waste water, through drip irrigation.”

Retail outlets, restaurants, souvenir shops, plant nurseries and a multi-storey car park will form part of the destination in the second phase of its development. Work will start on site in mid-2013.

Developers are hoping to attract one million visitors a year once fully operational. 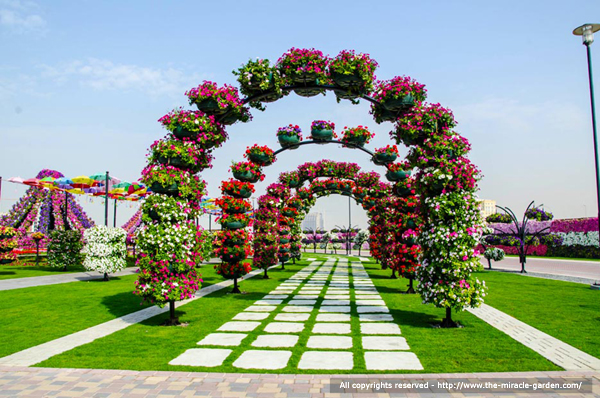 Burj-Al-Arab: One and only Seven Star Hotel in World

The Palladium: Most flexible entertainment venue of Dubai